In August of this year, we received a quotation request. Ian and Sharon needed a concrete floor built over the basement of a new build in Burgh Castle, Norfolk. It was immediately apparent to us from their enthusiasm that this was a personal project and that Ian and Sharon had a definite vision of the end result. As self-builders, Sharon and Ian opted to use Nudura, a system for ICF (Insulated Concrete Forms).

From a technical point of view, the design that we produced was unusual, resulting from a desire to keep the costs down and the building method stress-free.

Sharon has been kind enough to provide her perspective on how the project has been going in the story below: 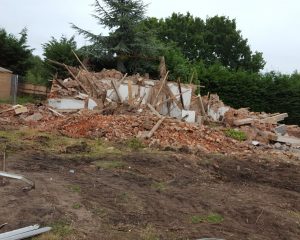 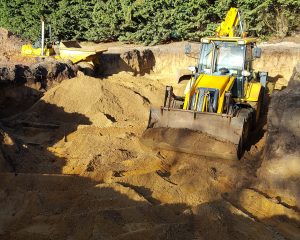 Excavating the basement ready for concrete 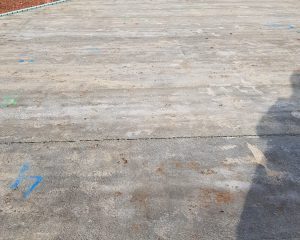 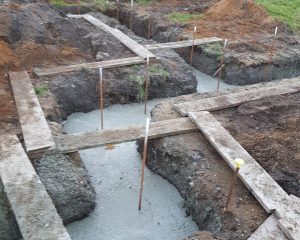 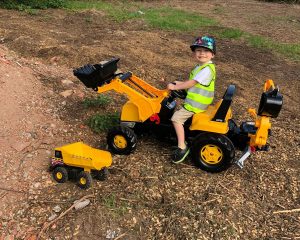 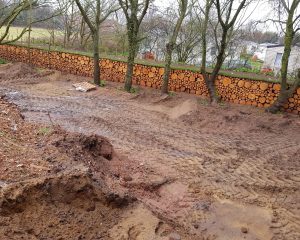 Made use of conifer logs to tidy bank during construction 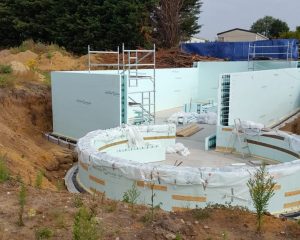 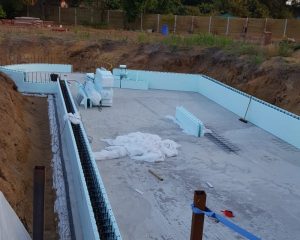 Nudura from ICF starting to go up quickly over plank floor 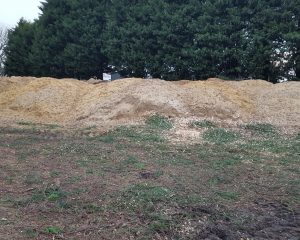 Sand piled up from the excavation of basement 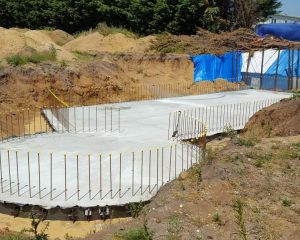 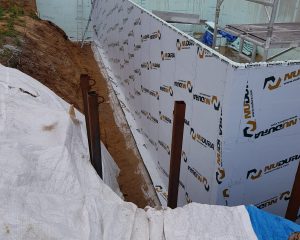 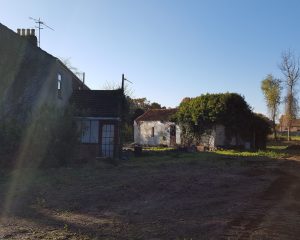 “We originally wanted to buy a building plot closer to my parents so we could build something more suited to us.

Unfortunately, there was nothing on the market, and the land that was available had no hope of getting planning permission.

So, we decided to buy a property that was, in our opinion, past its sell-buy-date and uneconomical to repair.

We searched for an architect that could help us get planning permission for a new property on the site of the soon-to-be demolished house. It was important that we found an architect that understood that we were going to carry out the bulk of the work ourselves, as long as we eventually managed this.

After many failed idea sketches of houses from the architect, we became disillusioned, so Ian sat and sketched a drawing showing the architect what we wanted. He worked his magic, got it through planning and so it began.

The basement was dug before Christmas, but we did not start building until the end of May. But wow! It was amazing how quickly things started to come together. So far, we have just had groundworkers pouring the basement slab. We’ve done everything else with our son-in-law and my 81-year-old Dad, (who still thinks he can do it all-they don’t make them like him anymore).”

“We have always been into DIY and this was something we were confident we could do ourselves as long as we made some smart decisions. Therefore, we chose Nudura from ICF supplies as our main building material, after seeing them at the Homebuilding & Renovating Show. While at the event, we had a crash course from Alan on the stand itself, which was really helpful. Consequently, we booked places on the ICF course (you have to do this, before you can buy Nudura), and here we are.

Basement built, tanked and ready for the next stage- the garage floor.”

Structural engineer Antony suggested we used floor planks to span the garage floors, which we were hesitant about. However, Matthew at Floorspan was there to guide us through, and he had the answers to anything we needed to know.

We fitted the planks ourselves, and they went in with no bother. Super pleased with them, so if we can use them more, we most definitely will.”

Sharon’s description of the project describes our challenge perfectly. We needed to create a design that could satisfy building requirements whilst remaining simple to install. Generally, this would be a straight-forward process as we would suggest using beam and block for a ground floor. However, as per the architect’s brief, this was a garage floor, spanning a basement cavity. With this in mind, hollowcore planks were a much more suitable solution. 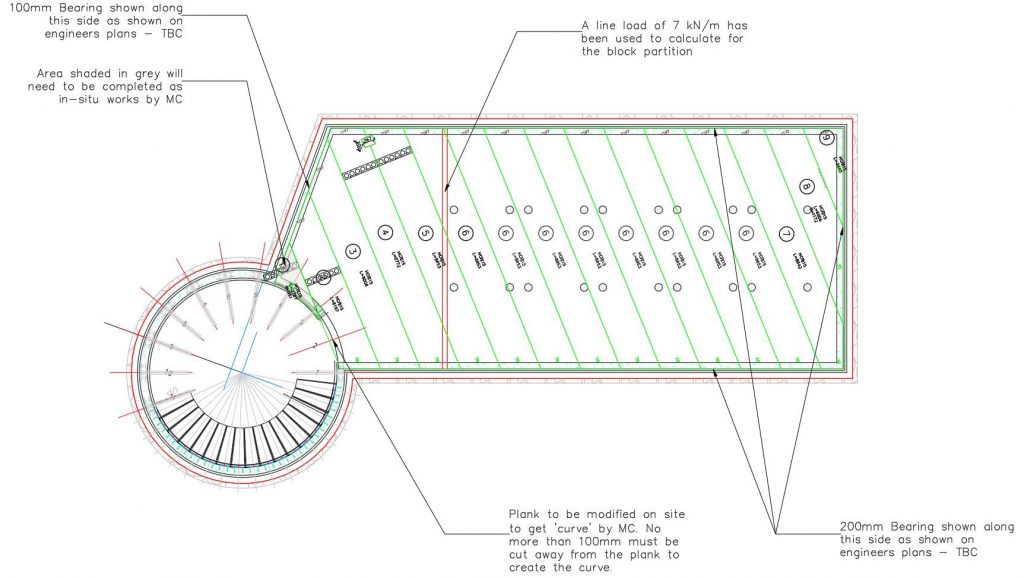 The design was further complicated by the presence of a staircase with a curved entrance. This meant that this area required additional load bearing capability. Our solution was to design and manufacture a floor from hollowcore plank by cutting the plank diagonally. This avoided the need for a steel lintel around the stair area and increased the load bearing ability of the floor.

As already described, Ian and Sharon installed the floor without issue, and the project continues to move forward. Their knowledge of ICF and the provision and design of the hollowcore floor spanning the cavity certainly helped the process. We wish them all the best with the project and hope to work with them again in the future.

Contact us to learn how hollowcore plank or beam and block floors can fit into your self-build.